About Us PoliSci Blog Students Speaker: Peace Center for Forgiveness and Reconciliation 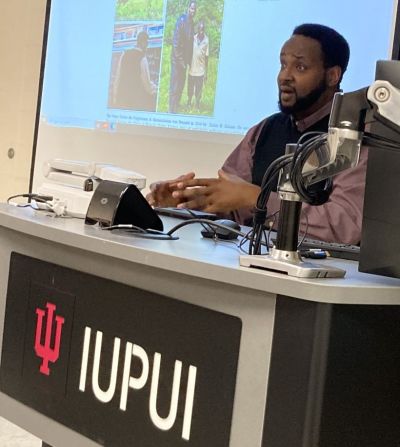 Kizito D. Kalima, the Founder and Executive Director of the Peace Center for Forgiveness and Reconciliation and a Rwandan Genocide survivor spoke to Professor Scott Pegg’s POLS Y338 African Politics on Tuesday, March 8, 2022. Before Kizito’s visit, POLS Y338 students had spent two class sessions watching the acclaimed PBS Frontline documentary “Ghosts of Rwanda” which was produced to commemorate the 10th anniversary of the Rwandan Genocide in April 2004. The Rwandan Genocide saw approximately 800,000 Tutsis and moderate Hutus killed in about 100 days.

Kizito Kalima was born in 1979 in Nyanza, Rwanda. He was 14 when the Rwandan Genocide started in April 1994 and turned 15 while it was happening. His father was murdered just prior to the genocide, and he lost his mother, uncle, one sibling and several other family members to the genocide. After several close calls, with two cousins, he escaped and survived in the marshlands and swamps for nearly three months until he was liberated by the Rwandan Patriotic Front (RPF) in July 1994. His height and basketball talent ultimately got him to the US via stops in Kenya and Uganda. He went to high school in Chicago and earned his undergraduate degree from IU South Bend. He currently lives in Indianapolis with his wife Stacey, their daughter and two adopted daughters who are also Rwanda Genocide survivors. Kalima is the author of My Forgiveness, My Justice: Overcoming the 1994 Genocide against the Tutsis in Rwanda. In 2014, he founded the Peace Center for Forgiveness and Reconciliation which runs programs in two main areas: 1) genocide awareness and prevention and 2) peace rebuilding projects. 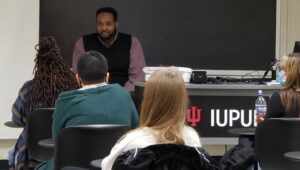 During his talk to Professor Pegg’s class, Kalima shared his personal experiences of nearly being killed on several occasions and almost dying of starvation while hiding in the swamps. He also candidly shared his anger and initially undiagnosed post-traumatic stress disorder (PTSD) after the Rwandan Genocide. Basketball was his main outlet for coping with personal trauma. After he lost that outlet due to injury, he realized that his only path to his personal healing lie in forgiveness. Kalima spoke movingly of returning to Rwanda and visiting a prison to meet one of the men who tried to kill him in order to forgive him. In answer to a student’s question, he distinguished between forgiveness as a personal choice or decision and justice as a national interest. He explained that while he personally forgave the man who tried to kill him, he would never say that he was innocent or did not deserve to be in prison. Kalima also spoke passionately about how influential the late Eva Mozes Kor, an Auschwitz survivor and founder of the CANDLES Holocaust Museum and Education Center in Terre Haute, Indiana was in shaping his own personal journey to forgiveness. We were privileged to have him join us in Cavanaugh Hall.