Posted on November 19th, 2021 in Students, Students/Alumni by Aaron Dusso 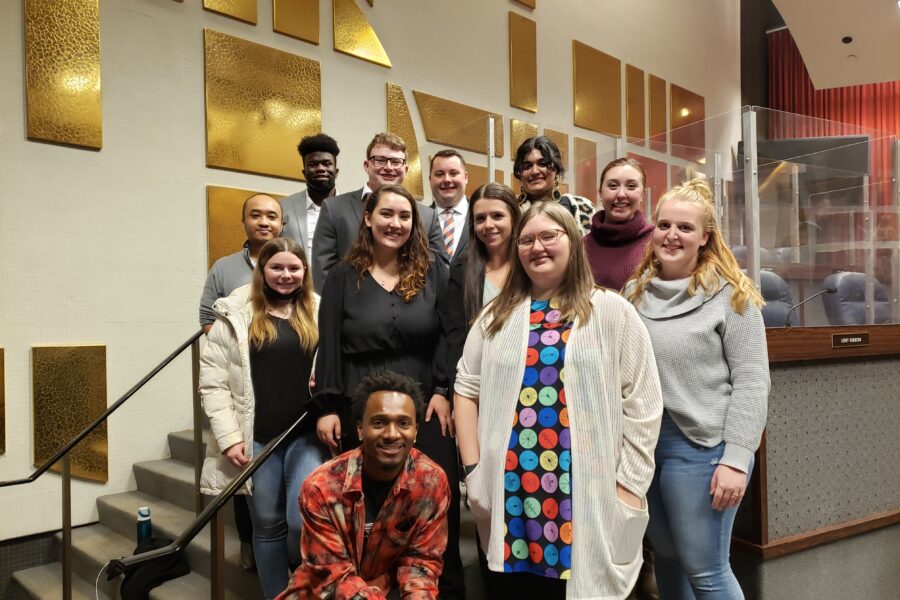 While the world is captivated by the trial of Kyle Rittenhouse, at IUPUI we are following the hottest trial in Midlands – literally.  Maybe you are not familiar with State v. Dakota Sutcliffe.  Sutcliffe is accused of setting fire to Chuggies Bar in Midlands.  A firefighter died while trying to extinguish the blaze. Students on the IUPUI Mock Trial Team spent their weekend arguing the arson case in the City/County Building in Indianapolis.

The IUPUI Mock Trial Team hosts an annual invitational – The Mock 100 every year.  Mock trial teams have been forced to compete virtually of late.  The Mock 100 is one of the first in person tournaments in nearly two years.  25 teams from all over the country traveled to Indianapolis to compete in the Mock 100.

Mock Trial teams receive their annual case in late summer.  The teams prepare both the prosecution and defense sides of the argument for competition.  Teams compete in invitational tournaments leading up to the mock trial regionals beginning in February.

A Mock Trial competition round consists of two teams, each with three attorneys and three witnesses.  Attorney present an opening statement, case in chief, cross examinations and closing arguments.  Each witness is prepared by the attorneys to answer questions about the case.  Attorneys must understand the evidence rules and object as needed.  Each round has a presiding judge who rules on objections and one or two additional judges who score the attorneys and witnesses.

The Mock 100 was judged by local attorneys, judges, and law students. Competitors and their coaches gave the Mock 100 high praises.  The teams were happy to be back in an in person competition and they really enjoyed using the courtrooms in the City/County Building.

The IUPUI Mock Trial Team had a great competition.  Sara Berge, a Senior Law in Liberal Arts Student, won an outstanding witness award.  The team was 7th in overall points out of the 25 teams.  The team is coached by Payton Cole, an attorney with the Marion County Prosecutor’s Office and Sydney Kadinger, 3L at the IU McKinney School of Law and an alumni of the IUPUI Political Science program.

The students and coaches practice every Tuesday and Thursday from 5:30-7:30pm and complete in many events throughout the year.  While the IUPUI Mock Trial Team is set for this year, if you are interested in joining the team next fall, please contact Professor Engels at eengels@iupui.edu.