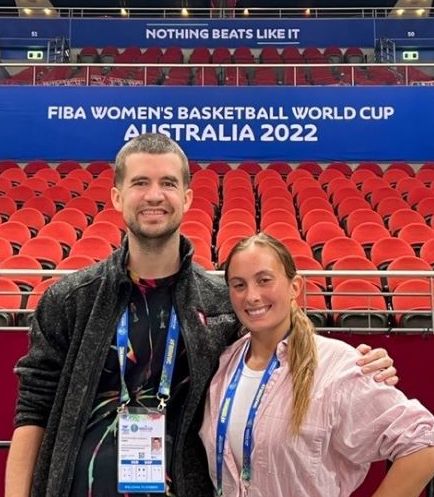 Their stories will appear on USAB.com, the official website of USA Basketball, and the Sports Capital Journalism Program website.

The United States is attempting to win its 11th gold medal in the event and the eighth in 10 tournaments since 1986. The USA began play in Group A against Belgium, a 2018 semifinalist ranked fifth in the world by FIBA, at 11:30 a.m. on Thursday (9:30 p.m. Wednesday eastern time).

Their opportunity marks the fourth time in just over six years that students from the Department of Journalism and Public Relations at IUPUI have covered a major international sporting event. Those events were the Olympic Games at Rio de Janeiro, Brazil, in 2016, the FIBA Women’s Basketball World Cup at Tenerife, Spain, in 2018 and the Pan American Games at Lima, Peru, in 2019.

Lounsbury and Kaelble will be supervised by Sports Capital Journalism Program director Malcolm Moran, who has covered 11 previous men’s and women’s Olympic and World Cup tournaments.

“The coverage of major international events has become a signature of our program at IUPUI because of the life-altering experiences they provide and the confidence that comes with navigating through the inevitable logistical challenges,” Moran said.

Kaelble, a lifelong Indiana resident, covered the past two NCAA men’s basketball tournaments, including the 2022 Men’s Final Four at New Orleans. He is a graduate of the University of Indianapolis with a bachelor’s degree in communication and a concentration in sports information. He has interned for the Horizon League and writes for Softball America, an online publication covering softball throughout the country.

“I am happy and honored to be here to have the chance not only to watch basketball from around the world but to embrace the opportunity to continue to improve my writing and enjoy Australia,” Kaelble said.

Lounsbury, from Lee’s Summit, Missouri, is pursuing a M.A. in Sports Journalism after graduating from IUPUI with Honors and High Distinction with a B.A. in Journalism. She was recognized with the Academic Achievement Award by the Department of Journalism and Public Relations, which is given to an outstanding graduating senior in the program as chosen by the faculty.

Lounsbury has worked as a volunteer sports journalist for IUPUI athletics, a content intern for the Indiana University School of Social Work and has served in multiple leadership roles as part of the IUPUI chapter of the Public Relations Student Society of America. A fifth-year member of the women’s tennis team, Lounsbury will serve as captain next season. From 2019 through 2022 she has been recognized as an Intercollegiate Tennis Association Scholar Athlete.

“I am very thankful to have been selected for this opportunity to report on the United States’ women’s basketball team at the FIBA Women’s World Cup,” Lounsbury said. “The opportunity will allow me to gain invaluable experience in the sports industry, as well as connect me with other working professionals. I feel that as a reporter, I offer a unique perspective because of my experience as an IUPUI student-athlete on the women’s tennis team.

“I may be able to see different elements of a game that other reporters may not see,” she said. “For example, I am able to easily pick up on changes in team dynamics, understand the qualities that make an athlete successful, and I am able to personally relate to the competitiveness and drive these athletes show during competition.”

The Sports Capital Journalism Program is part of the Department of Journalism and Public Relations in the School of Liberal Arts at IUPUI. It examines the sports industry through research initiatives and develops future professionals as storytellers across all communication platforms. The M.A. in Sports Journalism was the first of its kind in the nation when it was launched on the IUPUI campus in 2009-10.

Follow Kaelble and Lounsbury’s work on the Sports Journalism Blog.