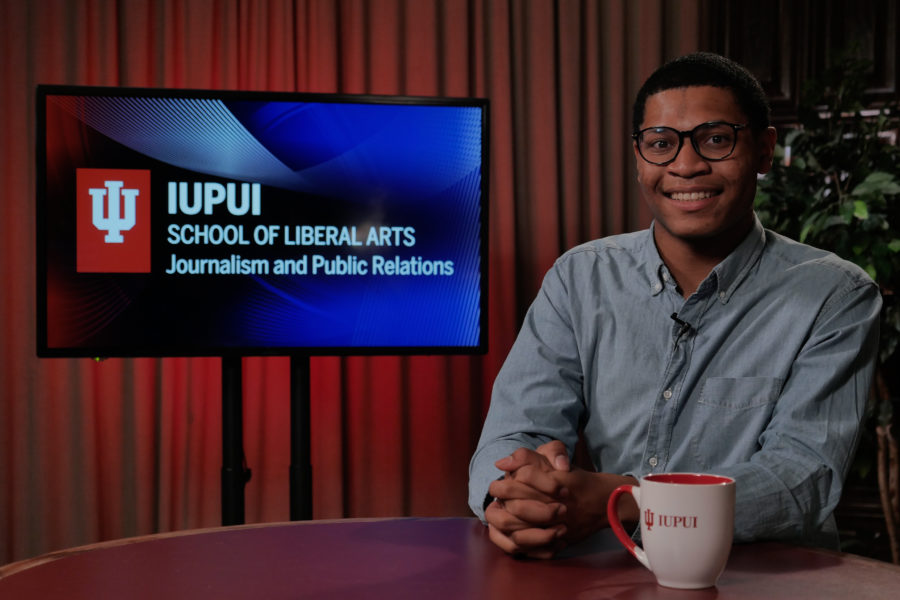 Since January, journalism major Terrence Lambert has had basketball on the brain. As a social media intern for IUPUI, Lambert has been helping the IUPUI Brand Team map out March Madness-related content for the university’s social media channels. (IUPUI is one of the hosts of the 2021 NCAA Division I men’s basketball tournament.)

“Throughout this semester I have been doing a lot of research on the history of the tournament,” Lambert said. “I am very excited to create content for March Madness. It’s something new that I will learn a lot from.”

In the coming weeks, the team’s months of planning will come to life as the tournament gets underway. Lambert will create TikTok videos, including a two-part series focused on asking IUPUI students, faculty, and staff trivia questions about the NCAA tournament. Those who answer correctly will have an opportunity to win a mask.

When he’s not focusing on March Madness content, Lambert is busy developing videos and Instagram stories, like promos for JagHacks, Club of the Week, and JagNews. Lambert, along with a fellow intern, even filmed a video with two of IUPUI’s mascots, Jawz and Jazzy, over the 2020 winter break. (The group made gingerbread houses together.)

“The thing I like most about the internship is collaborating with the other interns,” he said. “We all bounce ideas off of each other to come up with the best content possible.”

Lambert’s supervisors edit and sign off on his projects before they are published for thousands of people to see. Lambert keeps an Instagram story spreadsheet and determines how well each story did once it is published.

One of Lambert’s goals for his internship is to learn more about and become comfortable using newer forms of social media, including TikTok. Lambert recently recorded a TikTok discussing advice he would give to his freshman self now that he is a senior. That video was later used by the Office of Undergraduate Admissions to get prospective students interested in IUPUI.

“What started off as a simple TikTok video on IUPUI’s page turned into something more significant and potentially made a lasting impact for the university down the road,” he said.

Lambert says his internship parallels with his journalism and public relations education because the position requires research, writing, and finding sources for different projects. His internship is preparing him for his future career of writing for a publication or being a content creator, he said.

“I feel very relieved that I landed this internship because it allows me to do so much and get better at skills that I already enjoyed,” he said.

Like many people during the COVID-19 pandemic, Lambert works from home most days. He says that balancing school and his internship from home, two in-person classes, recreation and relaxation time, and his social life has been fairly easy for him.

“I have always had a full schedule since I came out of the womb,” he said. “From sports, performances, extracurriculars, school, work—I have always just naturally been accustomed to constantly being busy.”

Interested in interning with IUPUI? These internships are year-long; be on the lookout to apply in the fall.