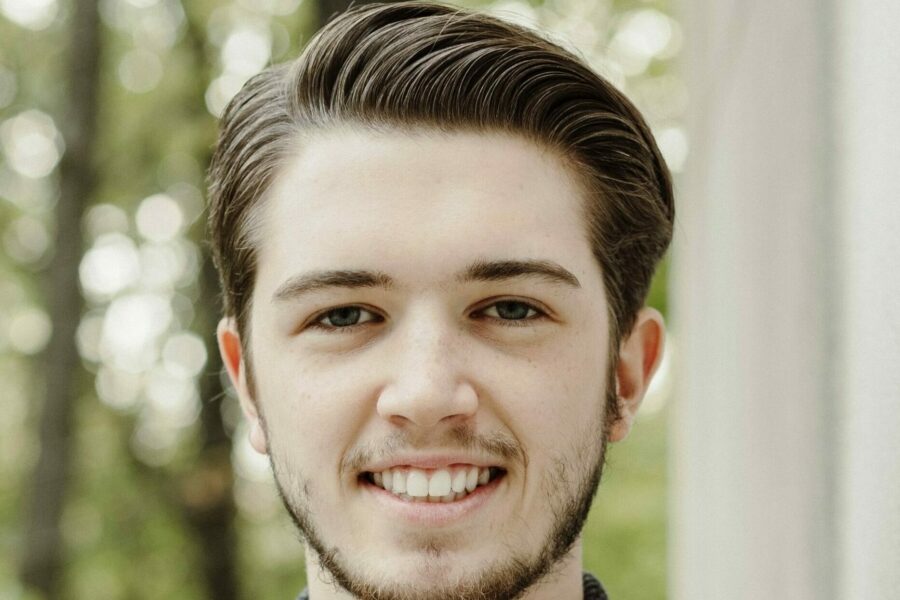 Devin Voss, B.A.J. ’21, has landed his first full-time job, covering sports for the Reporter-Times in Martinsville and for the Mooresville-Decatur Times. While a student at IUPUI, Voss was sports editor of the Campus Citizen, covered the 2021 NCAA Men’s Basketball Tournament, and worked on the IndyStar sports desk.

Voss saw the reporter position on the Gannett company website and scored an interview shortly after he applied.

“My boss liked the work I did in college and decided to bring me in,” Voss said. “Since I was already working for the Indianapolis Star, a fellow Gannett brand, all they had to do was transfer me over to The Reporter-Times, and that was that.”

With Martinsville only being 30 miles away from Voss’s home, he decided to stay in Indianapolis instead of moving.

“It works well,” he said. “The city is just a drive down State Road 67, and Martinsville is the farthest team south in their conference, so they often play Indy-area schools.”

We asked Voss more about his new gig:

1. How has it been transitioning to your first full-time reporting job?

“It’s definitely been something new, yet pretty seamless. There were some technical things, such as learning our story publishing software. But other than that, I felt very prepared thanks to the education I received at IUPUI.”

2. What types of sports and stories have you covered so far?

“So far I’ve covered the majority of fall high school sports – football, volleyball, soccer, cross country, etc. I’ve focused on feature stories, whether it’s about a player, school, or game. High school sports reporting, and almost all sports reporting really, has shifted into a direction where you go beyond the box score. Anyone can look up the score, or stats, or watch a live feed, but our goal is to provide readers our analysis and insight that they’re not getting from those other sources.”

3. What are the most memorable games or stories that you’ve covered at this job?

“One memorable game was during my first few weeks. It was a soccer game between two huge rivals – Mooresville and Decatur Central (they call it The Battle of 67). Mooresville was up 2-0 in the second half, and Decatur Central ended up tying it up within the final 20 minutes or so. It was a pretty animated scene. The fans were screaming, the teams were being scrappy with one another. A Mooresville player ended up knocking in a game-winning goal with a minute left and told me after the game, ‘I pulled my socks up (before the shot) because I knew I was knee sliding (in celebration) to the bench.’ It was quite entertaining.

Another story I really enjoyed writing was about three Martinsville volleyball stars and their rise from being freshmen to the success they’ve had recently.”

“I think the biggest surprise for me was the amount of work a journalist really has to do, especially in this age. I write a lot of stories every week, and often have to be my own photographer for them. Along with that, finding a balance between writing stories, attending games, getting in touch with sources, and performing interviews is not easy. Learning how to balance work and life is something I’m still trying to figure out.”

5. What are you looking forward most to about this job?

“I’m looking forward to learning about and telling the stories of the athletes, teams, and people I cover. Martinsville, Mooresville, and Monrovia aren’t places that get a ton of coverage elsewhere, so being able to get names and stories out there from those communities is something that I really look forward to continuing to do. It’s very rewarding.”