Mitchell Douglas in the Public Eye 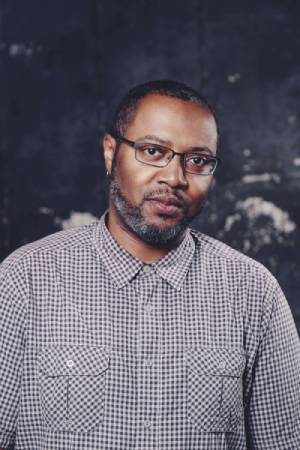 Though his demeanor is famously reserved, IUPUI creative writing professor Mitchell Douglas has never shied away from putting his work in the public eye. A stroll around the IUPUI campus will lead you to the beautiful Healing Waters fountain in the Commonground Plaza surrounding Eskenazi Hospital, where a poem of Mitchell’s is inscribed in the stone of the fountain. The waters fill and recede periodically to reveal the line “the obscure is revealed.” Integrating writing, art and public life is inherent for Mitchell, whose piece “In the name of the movement: Black Lives Matter Plaza, Breonna Taylor, and the long road to justice,” published in Salon.com, includes a photographic and written account of his 2020 visit to Washington, D.C. in the wake of protests for victims of police violence.

Within the past few years, you might have also caught Mitchell reading around town from Cooling Board: A Long-Playing Poem, which was nominated for a 2010 NAACP Image Award, from his collection \blak\ \al-fə bet\, winner of the 2011 Lexi Rudnitsky/Editor’s Choice Award, or from his most recent poetry collection, dying in the scarecrow’s arms. Or if you’re a Son Lux fan, check out Mitchell’s poetic tryptich Voyager, which appears in print in the album art and as a recorded performance set to music for the third album in the band’s Tomorrows trilogy, released in April 2021.

In support of his ongoing pursuit of poetry and art as pathways to public conversations about racial justice, Mitchell has won a 2021 National Endowment for the Arts Literature Fellowship in the amount of $25,000. Asked about his current work, Mitchell’s response was characteristically generous:

“Our students are fearless. When I ask them to write about personal experiences, whether as poems or in creative non-fiction, they come to the page with purpose. How can I not be inspired in my own writing when every semester I’m amazed by what my students are willing to share?”