Posted on March 3rd, 2022 in Blog by Prabakaran Jayaraman 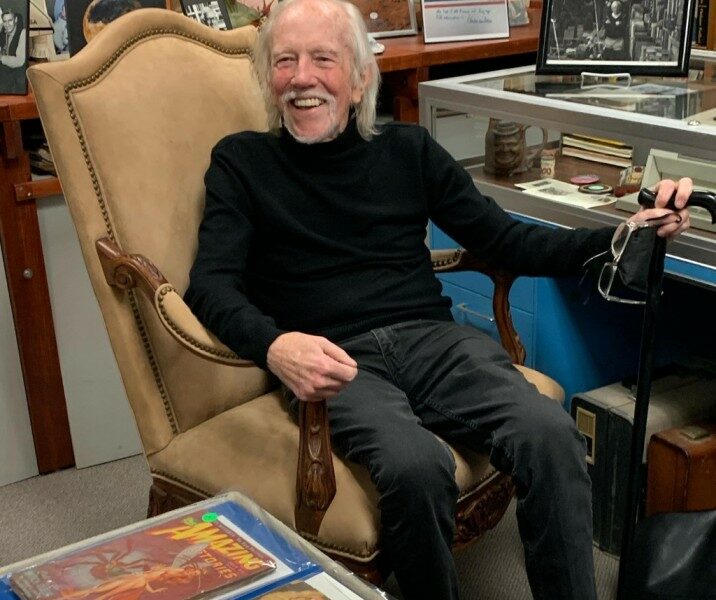 As Tobias Andersen was guided through the many distinctive artifacts in the Center for Ray Bradbury Studies prior to the opening night of his 5-person adaptation of Fahrenheit 451 at the Indiana Reparatory Theatre, he shared unique anecdotes about his life in the theatre, his relationship with Ray Bradbury, and the sheer delight of visiting the center.

About his decision to pursue his career, he said, “Last night when I saw the show, it took me back to 1963 when I left my father’s business to go to the University of Denver and study theatre because I’d only done a couple of community theatre shows, and somebody told me I should go and see this play called The Fantasticks. If you know the show, there is a character called the mute, and on the stage was this big lump of cloth. The mute comes in from the back, and the piano is playing the opening, and a woman sweeping up gets all the way up and she picks up the cloth… and he says, ‘You wonder how it all began.’ They had me right there, and I said, ‘Man, I’m in the right place.’”

On Bradbury, he shared this amusing story, “He came several times to Pasadena to see [The Illustrated Bradbury], and I think if I have a favorite, just because the way he would talk about, it’s The Inspired Chicken Motel. Ray swore to me that that is a true story. He did it more than once. You guys that do not know the story, his father had lost his job at the electric company, so they were all alone in the car, and they were looking around for work. They stopped in Amarillo at this chicken ranch thing. They were renting rooms for fifty cents a night because the price was low because the smell was high.”

He also expressed an interesting belief about Ray’s home in Los Angeles. “I don’t know if anybody else saw it the way that I did, but that was a kind of a Midwest home, that yellow and white and all of that stuff. I mean he’s in the middle of Century City, but he doesn’t care because he’s in his Midwest home. That’s the way I look at it.”

Most rewarding were the feelings he expressed about visiting the center. “This is a phenomenal thing. To see this in my eighty-fifth year is a really terrific thing. You are going send me this stuff [pictures taken during the tour] and I’m going to send it onto my daughters.”

Before leaving, Tobias had a couple of favors to ask of the staff which clearly demonstrated that he is as passionate about his role in theatre and his love of Bradbury as ever.

“Here’s one you can do for me, just put your antenna out. Find an actor who is smart enough to do The Illustrated Bradbury. You can make money! You can book that thing. Here’s something else I’ll ask you guys. I have written to Ray’s agents. I’m trying to get them to produce this cut-down version. I’m going to write it. The reason young people nod their head, ‘I don’t know’ when you talk Ray Bradbury or Fahrenheit 451 is because it is a cast of 25, and it is expensive to do. This one tonight is five characters, and I imagine most of the projections and stuff you could put on most any theatre, even a small one…Don’t let this message go away!”

The Tobias Andersen adaptation of Fahrenheit 451 continues at the Indiana Reparatory Theatre through February 20th. Don’t Miss out!