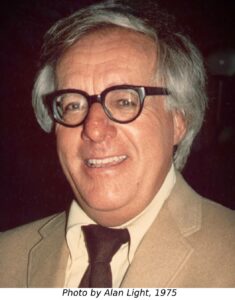 The following memorial was composed by Professor Jonathan Eller after Bradbury’s death in 2012.

Ray Bradbury was a child of the Midwest, a small-town dreamer who was determined to become a writer from the age of twelve. He realized these dreams in Los Angeles, where his parents found a new life in 1934, the fifth year of the Great Depression. Ray turned fourteen that summer, and went on to graduate from Los Angeles High School in 1938. But the core of his education came from library books; he would spend his long life celebrating the written word, and safeguarding the books and libraries that define our humanity and our values.

He hated intolerance, and those who deny the existence of intolerance. He was not afraid to write about and condemn the evils of prejudice and racial inequality at a time when such stories were hard to publish in America. In 1953, his stories about societies that destroy the precious gifts of imagination and creativity by destroying books culminated in Fahrenheit 451, a modern classic that, more than any other novel, has come to symbolize the importance of preserving literacy and literature in an age dominated by multi-media entertainment.

Ray Bradbury’s enduring early story collections and novels, often transcending genre boundaries, have remained in print for more than half a century. Aldous Huxley called him a prose poet, recognizing his rich metaphorical language and lyric style. Four generations of school children have read his stories; many of today’s astronauts and scientists first turned their eyes to the skies after reading The Martian Chronicles and such stories as “R Is for Rocket” and “The Golden Apples of the Sun.”

All his life, Ray Bradbury firmly believed that Humanity is destined to reach the stars. He would often tell students that his job was “to find the metaphor that explains the Space Age, and along the way to write stories.” Above all, he celebrated the celestial grandeur of the Cosmos, and called us all to consider our place in it. In June 2000, he urged Caltech’s graduating class “to witness, to celebrate, and to be part of this universe . . . you’re here one time, you’re not coming back. And you owe, don’t you? You owe back for the gift of life.”