About Us History of the Ray Bradbury Center

History of the Ray Bradbury Center

In the spring of 2007, the Indiana University School of Liberal Arts at IUPUI created the nation’s first center for the study of science fiction and fantasy author Ray Bradbury.

The past Director and co-founder of the Center for Ray Bradbury Studies, Chancellor’s Professor (now Emeritus) Jonathan Eller, enjoyed an intellectual friendship with Ray Bradbury for the last twenty-three years of the author’s life.’

Initially, the Center for Ray Bradbury Studies was an extensive research library and small archive that accommodated visiting researchers, but its primary function was to produce a scholarly journal, The New Ray Bradbury Review, and the multi-volume scholarly edition of Ray Bradbury’s stories in their earliest forms, The Collected Stories of Ray Bradbury.

As of 2022, The New Ray Bradbury Review will be published in an online, open-source format through Indiana University Press. 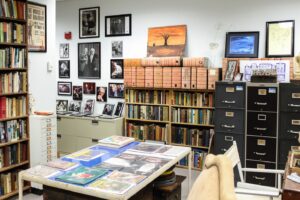 Initial archival acquisitions began soon after the founding of the Bradbury Center, by way of periodic gifts of original Bradbury papers and books from Donn Albright, Professor (now Emeritus) of the Pratt Institute and Bradbury’s principal bibliographer for many years. In addition to these original documents and books, Albright’s close ties to Eller and the Bradbury Center led to an ongoing program of first photocopying (then eventually scanning) Albright’s significant personal Bradbury collection for “virtual” deposit in the Center. In these ways, the Center had a significant footprint of original and virtual collection archives in place prior to Ray Bradbury’s death in June 2012.

At his passing, Ray Bradbury’s home still contained thousands of copies of his books, and over a hundred thousand pages of his works and related papers. Bradbury had bequeathed these treasures to Donn Albright, who decided to gift much of his bequest on to the Center. In June and again in mid-October 2013, little more than a year after Ray Bradbury’s passing, Albright, his daughter Elizabeth, and Eller supervised the initial inventory, final packing, and load-out from Bradbury’s Los Angeles home; this effort, which included many days of sorting and staging great amounts of material, was documented through an extensive photographic essay by Elizabeth Albright.

The Bradbury family followed Albright’s example by gifting their father’s office and many awards and mementos, and the combined shipments (more than 18,000 pounds) were transported cross-country to the Bradbury Center. The Albright books and papers constituted more than three-quarters of the combined $6.2 million appraisal for these gifts.

The Bradbury Center’s mission immediately shifted to prioritize preservation and access of the collection and to develop the cultural and educational outreach that such an extensive and high-profile single-author archive could provide to local, regional, and national communities.