Abstract:This study explores Ricardo Piglia’s fictionalization of the 1965 true-crime story that inspired his 1997 novel, Plata quemada (Burned Money) and in particular, the author’s creative choice to invent a homoerotic relationship between 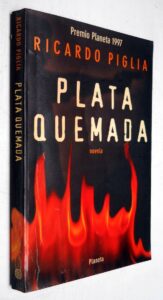 the two main characters who form part of a band of criminals that robbed millions of Argentine pesos in a deadly attack on an armored truck. Piglia’s decision can be viewed as a daring attempt at creating a “fake news” version of the story that is based on historic events. But more significantly, the invention of an emotional and physical relationship between the two male protagonists serves a powerful structural function in the novel that contributes significantly to its critical success and lasting popularity. By means of the homoerotic relationship, Piglia is able to elaborate a modern-day Argentine tragedy —one that elicits a sympathetic cathartic reaction in the reader as the flawed main characters face certain death in a massive police siege of their Montevideo hideout. And while the title of the novel may highlight the climactic act of rebellious socio-economic nihilism —the burning of millions of pesos before the eyes of the police and the crowds of onlookers—, the novel as a whole demands a co-equal high point that culminates in the radically subversive, emotionally-charged scene of a tragic hero cradling his dying lover: Piglia’s queer pietà.

Herbert J. Brant is an Associate Professor of Spanish in the Department of World Languages and Cultures, IU School of Liberal Arts at IUPUI